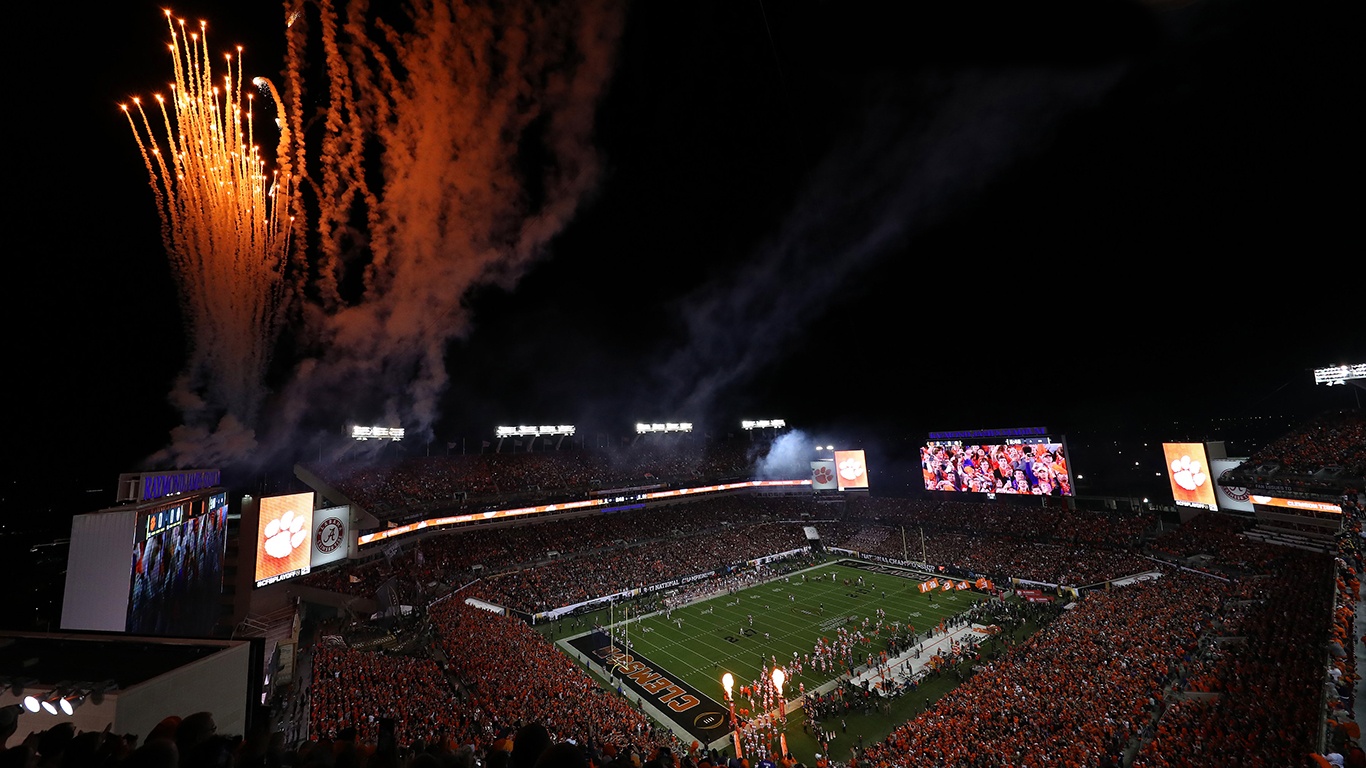 What a night in college football. The Clemson Tigers beat the Alabama Crimson Tide 35-31 to clinch their first national championship since 1981. Are you surprised? The Tigers sure aren’t. They knew it was going to happen – it was just a matter of time.

There are a lot of “what ifs” when it comes this game. What if Bo Scarbrough hadn’t left the game? What if the officials called the pick plays differently? What if Hunter Renfrow took the full scholarship at Appalachian State instead of walking on at Clemson?

We could ask these questions all day, but we could still arrive at the same conclusion: The Clemson Tigers are the new national champions. Just let that soak in and reflect back on some of the highlights of the game.

Whether you’re a Clemson fan or an Alabama fan, you’re going to remember the final play of the game for ages. You just might remember it a little differently.

It’s a little messy. But regardless, it’s up to the officials’ discretion as to whether such moves are deemed legal or not, and in this case, it was completely legal. Yes, Artavis Scott got tangled up with Alabama defensive back Marlon Humphrey, but as far as officials could tell, Scott didn’t initiate that contact, and he never touched Alabama’s Tony Brown. In other words, he didn’t intentionally impede a defender trying to get to the intended receiver. This chaotic moment is what freed Hunter Renfrow and gave him the space he needed to get the game-winning touchdown.

It’s a controversial call and among one of the more subjective penalties in football, but these picks don’t get penalized often, and the officials let it slide throughout the game.

Watch the final play below:

This is a no-brainer. He may have missed out on the Heisman Trophy, but most agree he’s the best player in college football. It’s hard to argue with that after his performance last night.

Sure, Watson didn’t look like himself the first half of the national championship game – not to say he didn’t play well – he just wasn’t the Deshaun we all know and love. But something must have happened at halftime because he came out the second half looking like an entirely different person.

Watson led the Tigers to overcome a two-touchdown deficit and finished with four touchdowns, 420 passing yards and 43 rushing yards. There’s no denying that he has the heart and soul of a champion. What a way to finish off a college career.

This guy turned down a full scholarship to Appalachian State to walk on at Clemson. And now he’s a hero. Renfrow put on a stellar performance in last year’s national championship game, and he did it again this year. Watson hit Renfrow for two of the most important touchdowns of the game. One came on a short pass that Renfrow took all the way for a 24-yard touchdown. The other came in the final play of the game with one second left. The Tigers knew this wide receiver was going to be special – they just didn’t realize how much.

Easily one of the best running backs in the game, Bo Scarbrough got things rolling on Alabama’s second offensive drive of the game as he outran Tigers defenders and crashed into the end zone for a 25-yard touchdown. He struck again in the second quarter with a beautiful 37-yard touchdown to increase the Crimson Tide’s lead to 14-0.

This monster of a running back was a huge factor in Alabama’s success this season, and his performance in the national championship game did not disappoint. Per the NCAA, he’s the only player since 1998 to rush for two touchdowns of at least 25 yards in the national championship game. Unfortunately, he left the game late in the third quarter due a right leg injury – an unfortunate circumstance that likely changed the direction of the game.

Take a look at the team stats and individual stats from the game below (via ESPN). 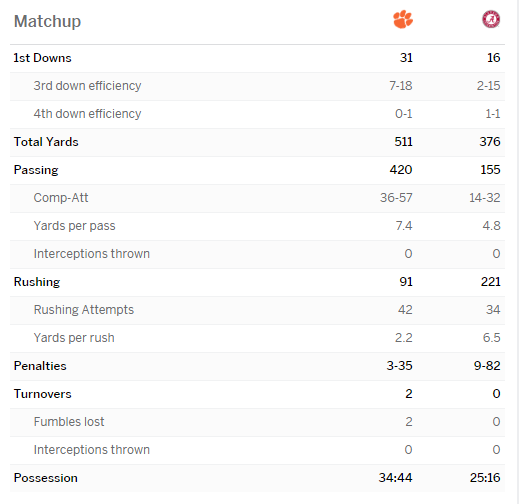 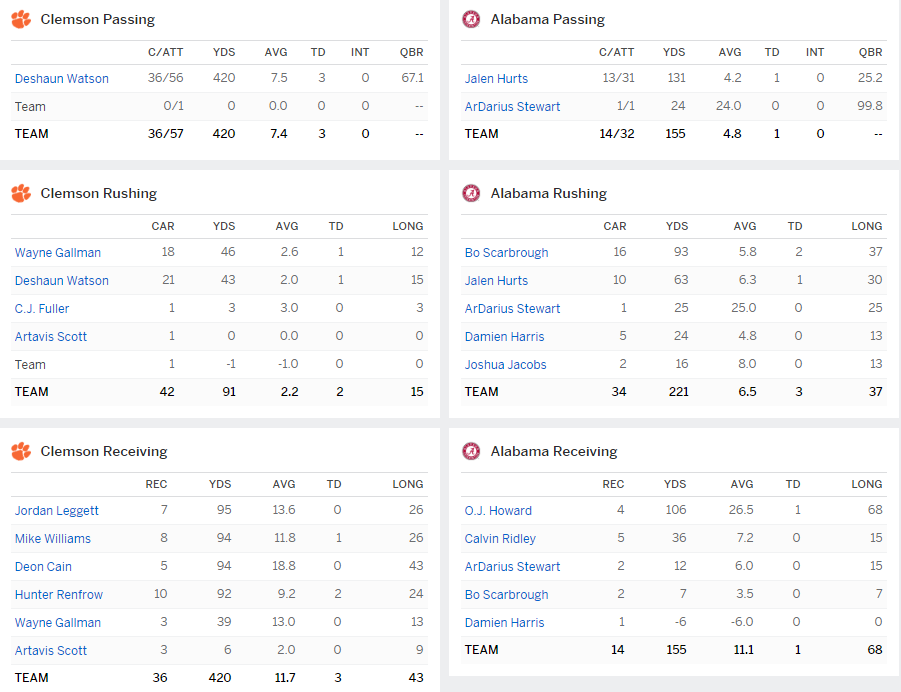 We’re already thinking about next year. Get on the waitlist for Official Ticket Packages to the 2018 national championship game, and be the first to know when they are released! Will Alabama or Clemson make a run at it once again?

Get on the 2018 College Football Playoff National Championship Waitlist