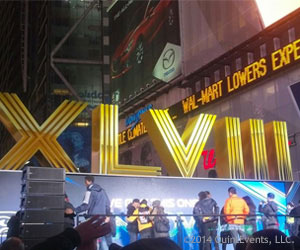 The season may be over, but the playoffs are only beginning. Here we are at the start of 2014, standing on the threshold of the NFL Playoffs, and we find ourselves looking back at the 2013-2014 season. We’ve seen amazing comebacks, player injuries, snowy games, and close scores. Some of us have even been named Fantasy Football Champions.

It’s at this point in the journey that some of us must say “better luck next year” as our teams fell short of being Super Bowl worthy. For the rest of us, it’s more important than ever to back our teams as the title of Super Bowl Champion is still attainable.

Let’s take a look at the NFL Playoff schedule:

So maybe there’s no way of knowing for certain if your team is going to make it to the Super Bowl yet, or maybe your team is already out of the running, but it’s the Super Bowl! What football fan wouldn’t want to be at Metlife Stadium when history is made!?

With QuintEvents Official Partnership with the NFL and New York City as your playground, we can assure you that your experience at the 2014 Super Bowl will be unique in the best way! With access to the Official NFL On Location tailgate experience, Official Super Bowl parties, luxurious accommodations and more, QuintEvents has got you covered at the first ever cold-weather Super Bowl!

Get more information on how you can attend Super Bowl XLVIII today!

Take me to NYC and Super Bowl XLVIII