The matchup is set for Super Bowl XLVIII, as the Denver Broncos and Seattle Seahawks will face off in the biggest NFL game of the season.

Each team has proven to be the strongest team in their respective division, but it’s anyone’s guess who will win this year’s Lombardi Trophy.

Many NFL experts have weighed in, offering their pick for the Super Bowl Champion. So, I thought it would be a good idea to throw our pick into the ring and base it on some really interesting stats!

How Did We Determine the Winner?

To determine the winner of Super Bowl XLVIII, we looked at the regular season team stats of both the Denver Broncos and Seattle Seahawks. We pulled 22 team statistics, both offensive and defensive, and ranked Denver and Seattle based on the 32 NFL teams. 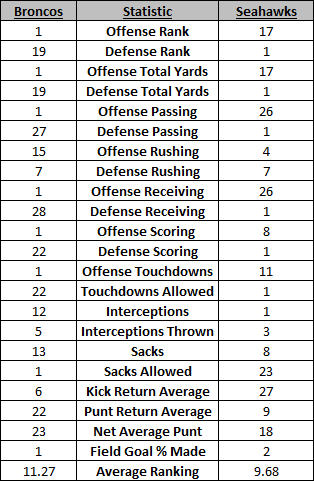 Looking at all offensive statistics, Broncos scored an overall average of three across all statistics, while Seattle scored a 15 average.

This is not surprising! Denver is known for their strong offense, especially at the Quarterback, Receiver, and Offensive Line positions. They are also the top scoring offense in the NFL and allow the lowest amount of sacks. Seattle, though strong in the running game, is statistically average offensively.

Seattle has a much stronger defense averaging 2.4 across all statistics compared to Denver’s 18.7.

Seattle’s defense is number one in the NFL in total defense, yards allowed, and points allowed. With strong stats like these, it’s easy to see that Seattle has the edge defensively.

Seattle and Denver are very equal when it comes to special teams. Denver averages 13 across all special team statistics and Seattle averages 14.

Denver has a stronger kick return game, while Seattle is stronger at returning punts. Kicker wise, Matt Prater and Stephen Hauschka are ranked one-two in the NFL respectively in field goal made percentage. All said and done, it’s pretty much a wash when it comes to special teams.

So who is our favorite to win? Looking at all of the stats combined, Super Bowl XLVIII is expected to be a very close game. In a battle of strengths, Denver’s offense will go against Seattle’s defense virtually cancelling out these statistically.

Special teams is also a wash as both teams have very good kickers and average return games.

Denver should do a very good job stopping Marshawn Lynch, but may have a difficult time stopping Seattle’s passing game, led by Russell Wilson. Denver ranks 28th defensively against the pass and allows the 5th most passing yards per game in the NFL. The combination of Russell’s passing ability and the weakness of Denver’s secondary, gives Seattle the slight edge overall.