What is there that's more exciting that a college football rivalry? Each fan is so dedicated to their school and their team, and they share the same heart. They share the same drive. And while one group might be on the field versus in the stands, both components are equally important to the overall success of the team.

When your team wins, you win. When your team loses, you lose. This mutual feeling of alignment with your team creates an incredibly strong bond. This bond is what makes rivalries in college football so strong.

This unity creates an even bigger desire to beat other power house teams that have strong fan bases.

With that being said, let's take a look at three of the top rivalries in college football! 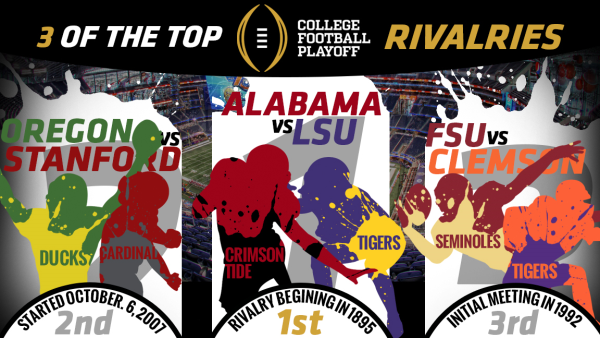 This rivalry has been around since forever, but it's grown exceptionally since Nick Saban came into the SEC. The SEC West has been recently transformed into an incredibly dominant conference and while Auburn and Tennessee have always stood out as top Alabama rivals, LSU sweeped in.

From 1895-2002, LSU struggled to beat to Alabama, never beating them more than two times in a row. When Saban entered the picture, he created a national power house out of LSU. He left after a while to head to the NFL, and then returned to college football to run the Crimson Tide program.

Since, both teams have been unstoppable, creating interesting meetings against each other. And since 2003, the two teams have won five championships! The personalities of each team make this rivalry a must-watch when it comes to college football.

While Oregon has always been a power house for college football, Stanford had a breakout season in 2007. The team upset a No. 2 USC team on the road under Jim Harbaugh, and it marked the beginning of the end of a Pete Carroll USC domination in the conference.

This also marked the shift in power toward the northern part of the Pac-12, and who led this division? None other than Oregon and Stanford.

The two teams are completely opposite when it comes to playing styles and physicality, but you can't deny their shared strength of winning. The Ducks managed to stop the Cardinal quite easily in 2010 and 2011, but since, Stanford has shown great skill in putting a stop to Oregon.

In the past several years, this match-up has been one of the most highly anticipated games in college football and there have been no signs of this slowing down. It's by far the most important game on the schedule in the Pac-12. This year, Oregon found triumph in their meeting.

While Florida State holds their top rivalries with Florida and Miami and Clemson has South Carolina, this is the biggest game on the ACC schedule.

In the past five years, either Clemson or FSU has represented the Atlantic Conference in the league title game and combined, they've won the last three.

The rivalry has only continued to grow with bad blood boiling between the two. This year's meeting was no different. Clemson took to capitalize off the Jameis Winston situation, but FSU still managed to walk away with the win. Future meetings will always carry the same heat.

Will it be a Top Rivalry in the 2015 College Football Playoff National Championship?

However, the worst thing that could happen is your missing the opportunity to see things pan out LIVE!

With Official Ticket Packages to the College Football Playoff National Championship, you can get coveted tickets to the game and unparalleled access throughout the weekend! With different package levels available, there's sure to be the perfect fit for you and your group.

For example, a Gold Level Package (top-tiered) includes 100 or 200 level tickets to the game with seats located between the 20s, and access to a pregame hospitality venue complete with a full premium menu, top-shelf open bar, collegiate football legend appearances, and interactive entertainment elements. You even get access to take the field in celebration after the champions are announced!

Luxurious accommodations and provided for transportation are also included in Official Packages, and you'll even receive an Official Gift Bag. Basically, there's no better way to experience the biggest game in college football!

So what are you waiting for? It's time to secure your access to the first-ever College Football Playoff National Championship! Call 1-866-834-8663 to speak to a Playoff Premium representative or visit QuintEvents website for more information.

Will you be there when it all goes down?

Secure My Spot at the College Football Playoff!