An Exclusive Peek at What You'll Find at Barrett-Jackson Scottsdale

If you're anything like us, you're chomping at the bit for the 2015 Barrett-Jackson Auction to take over Scottsdale, Arizona! You're more than ready for thousands of the world's most sought-after, highly valued and unique automobiles to cross the block in front of a global audience. You're ready to take in the hyped atmosphere, whether you're planning on bidding or not!

Well, folks, that time is almost here! The Barrett-Jackson Scottsdale Auction is just around the corner and with Official Ticket Packages through QuintEvents, fans are getting more exclusive experiences at this auto auction than ever before!

Take a look at a few of these highlight vidoes from Barrett-Jackson's past to hold you over until Jan. 10, and learn how you can join us in Scottsdale as a Barrett-Jackson VIP!

"This year in Scottsdale we, again, have something for everyone!" - Craig Jackson

"You've simply got to see them to believe them!"

"There's so much more to do at Barrett-Jackson besides watching the auction and buying cars!" - Shelby Jackson

New to Scottsdale in 2015, for the first time ever, Barrett-Jackson has teamed up with QuintEvents to offer Barrett-Jackson VIP Experiences! If you've ever wanted to attend this epic event as a VIP, the opportunity has presented itself.

The three package options available are:

With Owner's Box Packages, guests will actually be able to get exclusive access to Craig Jackson's VIP Skybox throughout the week! You'll be invited to enjoy complimentary gourmet fare, premium open bars, celebrity meet-and-greets, and a plethora of other VIP amenities such as meeting Craig Jackson himself! 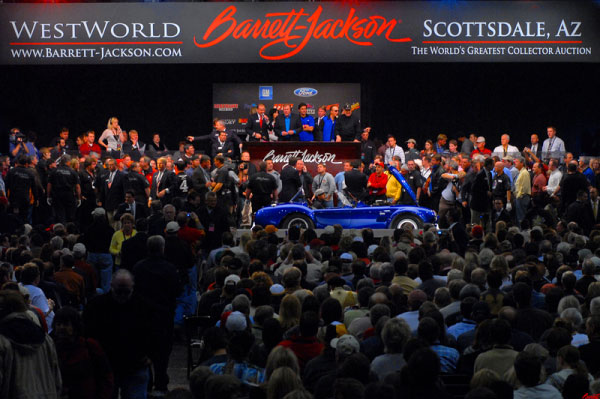 If you opt for a Gold VIP Package, you'll have access to an exclusive outdoor hospitality venue where you'll find food and beverage options, celebrity meet-and-greets, and much more!

Each package also includes VIP floor seating in the auction arena, a Barrett-Jackson VIP Auction Tour, a bidder badge with an approved application, souvenirs, and access to other exclusive events.

Learn how you can get your hands on an Official Barrett-Jackson Ticket Package today by calling 1-866-834-8663 to speak to a Barrett-Jackson VIP Experiences' representative or visit QuintEvents' website.

Make your dreams come true in Scottsdale at Barrett-Jackson!