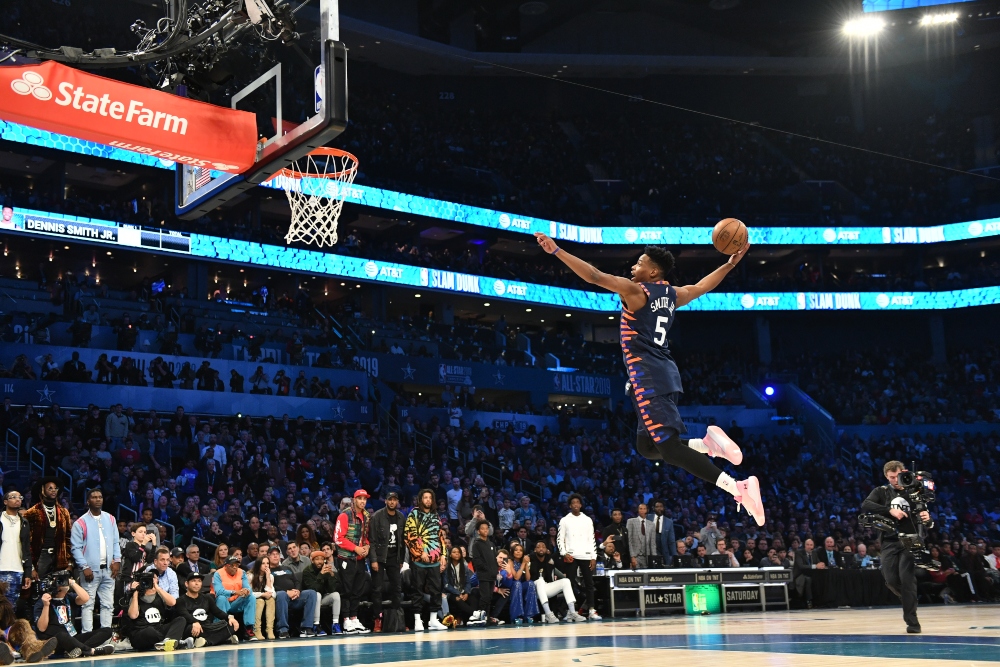 State Farm All-Star Saturday Night is focused on celebrating the most exciting aspects of the game with plenty of fanfare added in.

On the eve of the NBA All-Star Game, the game's best players and the biggest celebrities come out for a night of spirited competition that provides some of the sport's most memorable moments.

So what actually takes place on Saturday night?

For the uninitiated, here's a breakdown of all three events that form State Farm All-Star Saturday Night.

The Skills Challenge has been a staple of NBA All-Star since 2003, but took on new life in 2015 when it was switched to a tournament bracket.

Eight of the NBA's best "skill" players are selected for this competition and put into a single-elimination, head-to-head bracket.

1. Two players must dribble down the full length of the court while weaving through five obstacles and then complete a pass through a hoop positioned along the baseline.

2. After completing the pass, players must dribble back the full length of the court and hit a layup on the other end.

3. Finally, players must dribble back down the court once again and hit a three pointer. The player to complete all three of these feats first is declared the winner and moves on to the next round.

The Skills Challenge lasts for three rounds of head-to-head competition until a winner is declared.

The Three-Point Contest pits the best shooters in the league against one another.

The current iteration of the competition includes 10 participants, but the number has changed several times throughout the decades.

Five racks are set around the three-point line, with each rack containing five balls. In a rack of five balls, the first four are worth only one point when made, while the last ball in each rack is worth two (coined the "money ball"). In 2014, the contest was changed so that one of the five racks would consist of only "money balls" and the contestant could choose where he wanted this rack placed.

In the first round, each contestant has 60 seconds to score as many points as possible. The top three scores from this qualifying round make it into the finals.

The finals are the same format, with the highest score out of the final three contestants being declared the winner.

The Slam Dunk Contest is the main event of All-Star Saturday Night.

It's a competition that has shaped some careers and created highlights that will be played over a lifetime.

The contest used to have a more complicated structure, but since 2015 it has consisted of just four competitors.

In the first round, each participant can perform two dunks that are scored by a panel of five judges on a scale of 1-10. The top score for any dunk is a 50.

After each participant has completed their first two dunks, the two players with the highest combined scores move on to the final round.

The finals have the same set up, allowing both participants two dunks and the highest combined score being crowned the champion.

Don't miss NBA All-Star's return to Chicago from February 14-16. An Official Ticket Package from NBA Premium is the ONLY way that you can secure tickets to All-Star Saturday Night, as they are not typically available to the general public. Packages also include a ticket to the 69th NBA All-Star Game, access to 2-hour pre-game hospitality at Revel Fulton Market and much more.