NBA All-Star 2019 has now come and gone in Charlotte, but it will not quickly be forgotten.

Whether it was the stars aligning on the court, or them coming together for NBA Premium's Lunch With a Legend and pre-game hospitality, we have a lot to talk about from NBA All-Star 2019.

Guests were given an unforgettable experience throughout the weekend that was only made possible by an Official Ticket Package from NBA Premium.

Before we look ahead to what's in store for NBA All-Star 2020, let's take a look back at an eventful weekend in the Queen City.

Lunch With a Legend 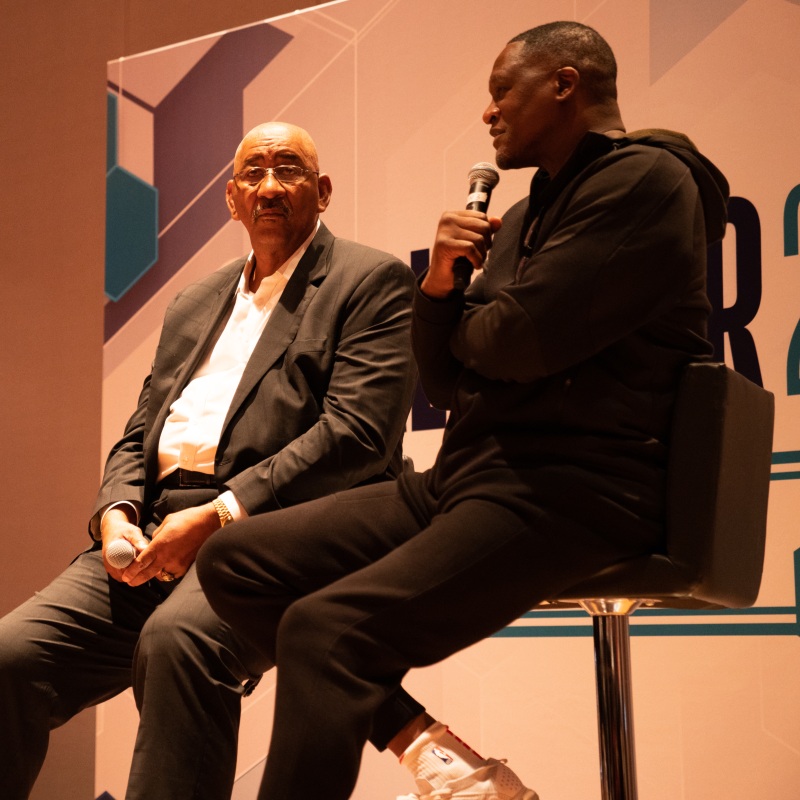 Our guests headed to the Richardson Ballroom at the Charlotte Convention Center on Saturday afternoon for the best meal that they'd eat all weekend.

And while the buffet of food was delicious, the reason the meal was so special was because of the company.

We were joined by NBA legends and Hall of Famers George 'The Iceman' Gervin and Dominique Wilkins for our Lunch With a Legend Q&A session, hosted by former NFL player and NBA personality Ahmad Rashad.

Both athletes came out to thunderous applause and captivated the audience for the entire session. They told stories of their playing days, including specific memories of playing against the likes of Michael Jordan, Magic Johnson and more.

Gervin spoke candidly about his difficult upbringing in Detroit and how he used basketball to get out of his rough situation and make a life for himself. He touched on the coaches who helped him along the way in high school and how he was nearly cut from him junior varsity team.

Wilkins chronicled some of his favorite moments of his career, including the Slam Dunk Contest showdown he participated in against Michael Jordan at NBA All-Star 1988 in Chicago.

Rashad spoke to the legends for almost half an hour, diving deep into their catalog of memories and sharing laughs with the entire crowd. 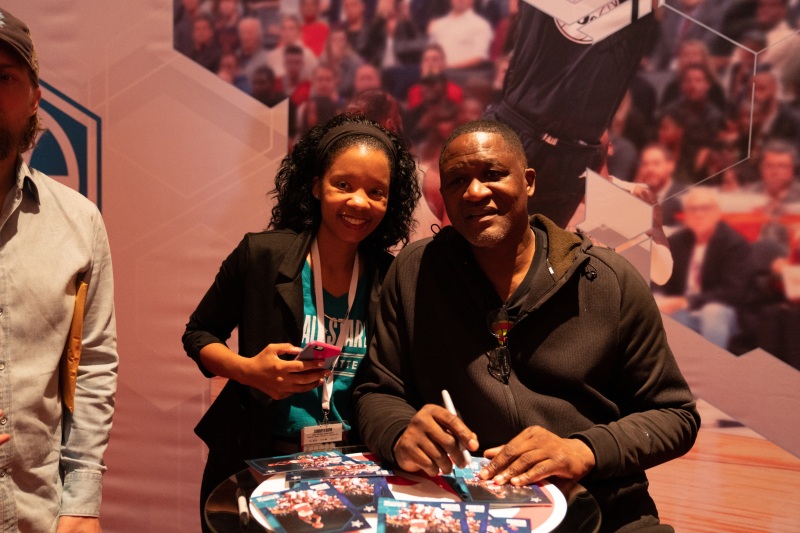 Following the Q&A session, the legends headed over to their autograph tables for a private autograph session with our NBA Premium guests. The lines formed quickly and fans had their items ready to be signed, whether it was player cards, mini basketballs, jerseys or anything else.

Each guest also got to snap a picture with the legends — forever immortalizing a night to remember. 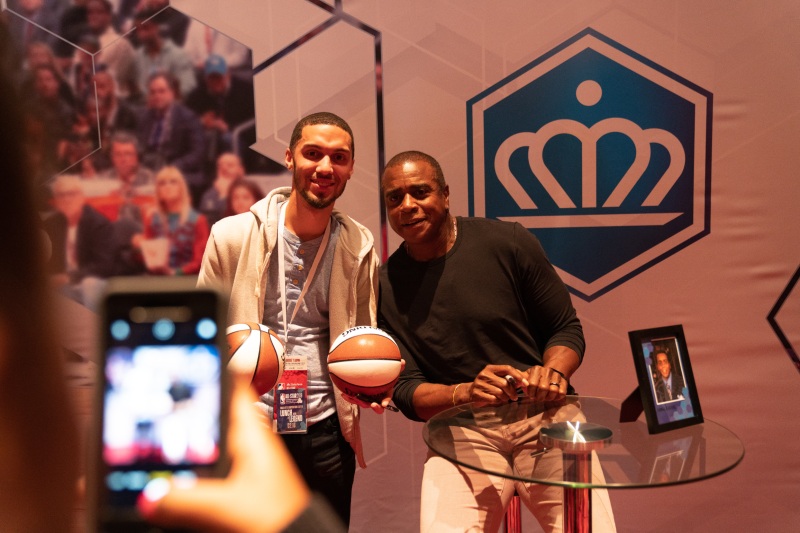 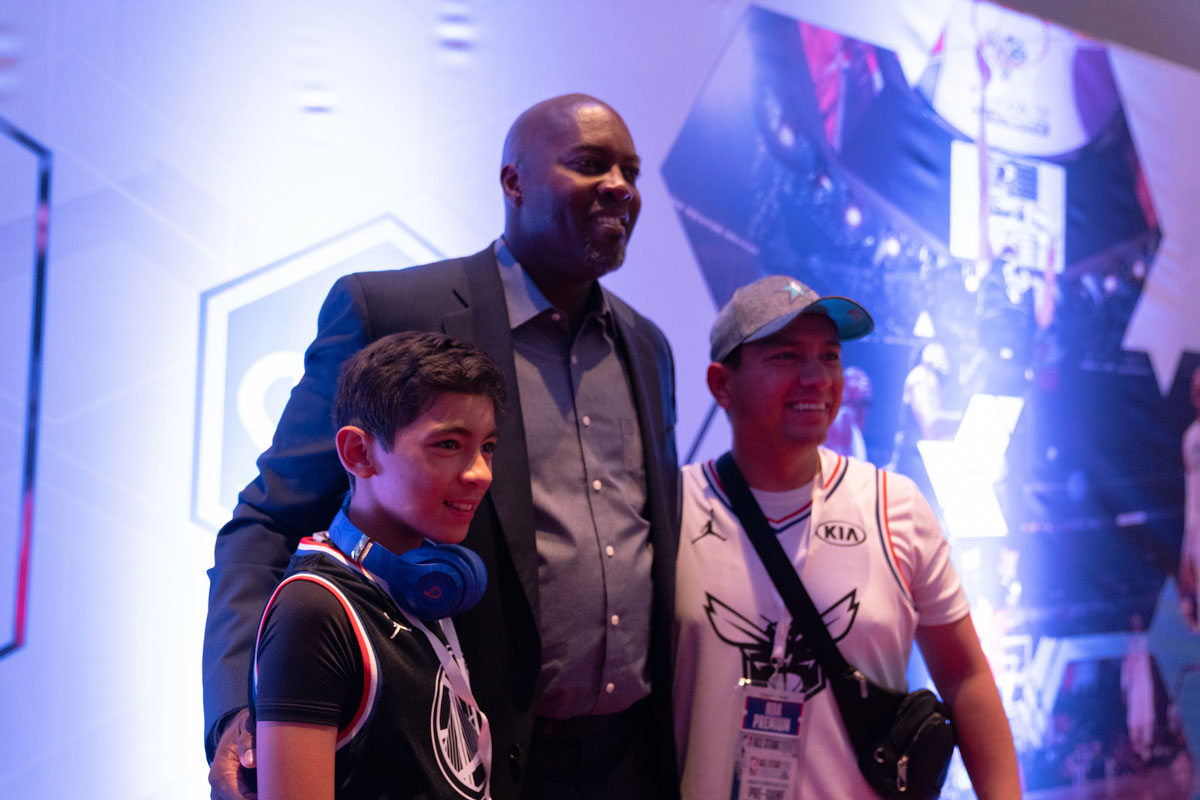 All-Star Weekend is all about the All-Star Game on Sunday, and there was no better way to prepare for the main event than in pre-game hospitality.

While Lunch With a Legend was a more intimate event given the Q&A format, pre-game hospitality was a full on party to gear up for the game.

Doors opened back up at the Charlotte Convention Center three hours before the 68th Annual NBA All-Star Game and the action got started immediately.

There was plenty to do in hospitality — but the first thing on everyone's list was grabbing dinner from the gourmet buffet and drinks from the premium open bar.

After filling up on food, guests could go meet the legends that were in attendance — Muggsy Bogues, David Thompson, Glen Rice and Artis Gilmore. The former players spent time mingling with fans, signing autographs and snapping pictures.

Outside of the player meet and greets, guests could also spend their time playing on the Pop-a-Shot or engaging with our VR station that put you right in the middle of a three-point shootout.

And if you wanted something other than a photo to remember the experience, we had a caricature artist present capturing our guests in a comical way.

Finally — the reason that everyone traveled to the Queen City.

All three nights of games and events were a celebration of the NBA's past, present and future.

Things kicked off on Friday with the All-Star Celebrity Game at the Bojangles Coliseum, followed by the MTN Dew Rising Stars game at the Spectrum Center.

The AT&T Slam Dunk contest featured three superstars with ties to the host state, but it was Oklahoma City's Hamidou Diallo who won over the crowd with a honey dip dunk over Shaquille O'Neal and a slam over the head of star rapper Quavo.

Then on Sunday night, Team Giannis and Team LeBron went to war in a battle of the titans. The NBA's best and brightest took center stage and played in a competitive game of one-upsmanship throughout 48 minutes. In the end, Team Lebron was able to leave with the comfortable win, 178-164.

All-Star Weekend is returning to Chicago next year for the first time since 1988. You can be a part of the action at NBA All-Star 2020 with an official ticket Package from NBA Premium. This is the only official source for you to get tickets to State Farm All-Star Saturday Night and the 69th Annual NBA All-Star Game, as they are not available to the general public. With the NBA returning to the house that Michael Jordan built, you'll want to make sure you don't miss out next year.

Get Your All-Star Package