Rookies Who Could Make the 2020 NBA All-Star Game 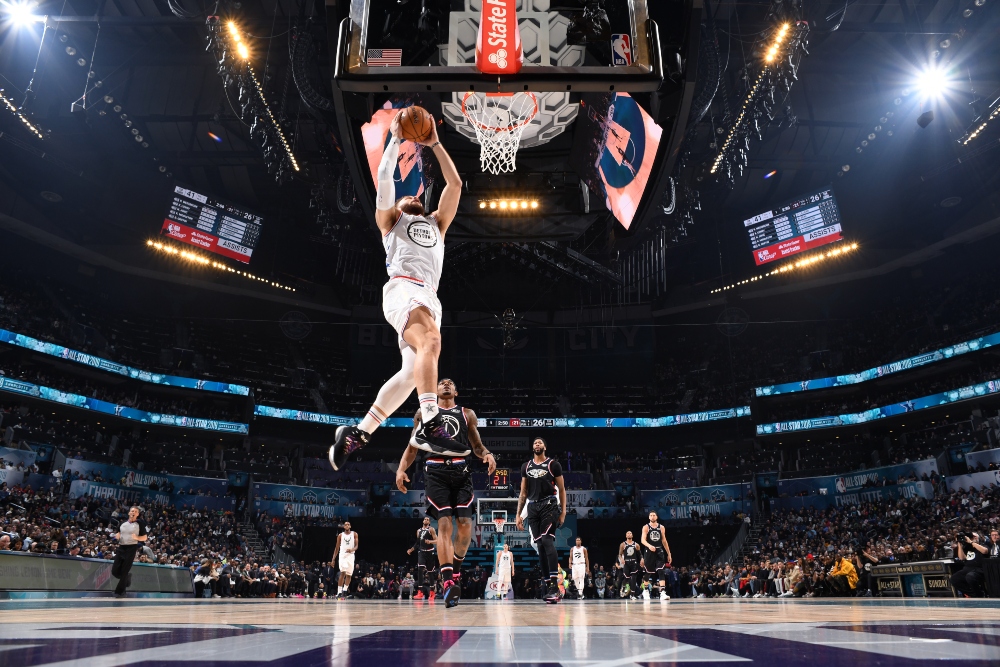 The 2019 rookie class still has everyone talking after one of the wildest offseasons in recent NBA history.

Packed with talent and expectation, many are expecting to be talking about the 2019 class in a similar manner to the way that we speak of the 2003 pool that included LeBron James, Chris Bosh, Carmelo Anthony and Dwyane Wade.

But are any of the members of the Class of 2019 going to burst onto the scene in their first season? Or at least enough to earn the elusive rookie All-Star selection?

It wouldn't be the first time a rookie has received All-Star honors (link to previous blog), but has become a more rare occurrence as the NBA enters a new era.

With that said, the 2019 class still could produce a star in year one.

Here are the rookies most likely to be named an All-Star in 2020.

At some point, the hype around Zion Williamson won't be able to hold up his reputation. Eventually, the results must come. This may sound harsh for a player with zero professional minutes to his name yet, but it's just an objective statement.

As the most hyped rookie in the Association since Lebron James came to Cleveland 15 years ago, Williamson will have all eyes on every 15-sized shoe step he takes on the court. And the comparisons to James will drive much of the narrative of his first season, even if they’re off base considering the stark differences between the two talents.

Williamson is entering a unique situation in New Orleans. While the Pelicans possessed the first pick in the 2019 NBA Draft, they weren't the bottom feeder that typically finds itself at the top of the draft. New Orleans won 33 games in 2018-19, a better total than six other teams across both conferences. While not a record that's overly impressive on paper, it showcases that the Pelicans aren't a franchise devoid of talent before the arrival of a man coined as a ‘savior’.

Jrue Holiday is still the team's general and most efficient player going into the season. In fact, he's arguably a Top 10 point guard in the league given his production since coming to the Pelicans in 2013. Also, New Orleans General Manager David Griffin brought in a dearth of reputable talent by dealing disgruntled superstar Anthony Davis in the offseason, a trade resulting in Lonzo Ball, Josh Hart and Brandon Ingram.

The point is — Williamson won't need to carry the load on Bourbon Street this year.

However, the veteran names surrounding Williamson don't squash any expectations for the marketable rookie. If anything, the team already has a skeleton built around him. With a proven guard like Holiday, a highlight-reel distributor in Ball, and Ingram and Hart on the wings, the Pelicans will still rely heavily on feeding Williamson down low for most of the season. With his 285-pound frame being used to his benefit, Williamson may skip over the physical adjustment many rookies need and jump right in as an X-Factor in coach Alvin Gentry's offense.

But we're talking about All-Star probability. While Williamson is the betting favorite for Rookie of the Year and could produce a shout for an All-Star spot in Chicago, he'll have to put up impressive numbers in a dense Western Conference. If Williamson is trusted from the jump this season, the generational talent could find himself averaging 20 points per game and around eight rebounds a game. With his name value added to those potential stats, a reserve spot may be calling his name.

What He'll Need: 20 points and 9 rebounds per game

No member of the 2019 NBA Draft Class is in a better position to completely reshape a franchise than Ja Morant in Memphis. The Murray State starlet is coming to Grind City at a turning point for the team — they said goodbye to longtime big man Marc Gasol at the trade deadline last year and shipped Mike Conley to Utah over the offseason.

With Jaren Jackson Jr.'s proficient rookie season down low and Morant being given full autonomy over the Grizzlies's back court, it's officially a new era in Memphis.

Morant will be given the green light to lead the new offensive system under rookie coach Taylor Jenkins. After commanding the Murray State offensive for the entirety of his sophomore and final college season, Morant has proven that he works most effectively as a ball-dominant guard with no reservations about attempting to take a game over.

The fear with Morant is the step-up in play from a mid-major program to Western Conference competition, but most aspects of his game already seem fine-tuned for the league. He's a surprisingly strong finisher at the basket and has the vision in half court sets to move the ball around before setting up a shot and establishing offensive flow.

Like Williamson, Morant will have to fight through a big crowd if he wants to be in Chicago for NBA All-Star 2020. The Western Conference is notorious for its arsenal of game-defining guards, even so much that Conley didn't earn one All-Star selection during his entire 12-year run in Memphis.

Morant is a scorer, though, and he can completely change a game with his presence on court. He's similar to Luka Doncic, who barely missed out on an All-Star berth after averaging over 20 points per game in his first season in Dallas.

What He'll Need: 23 points and 8 assists per game

While Duke’s Williamson, R.J. Barrett and Cam Reddish were considered the 'Big 3' to come out of the Triangle for the 2019 NBA Draft, Coby White has subtly worked his way into the public conscious. The North Carolina product stole the show in his one season in Chapel Hill, averaging 16.1 points and 4.1 assists per game as a freshman.

While he came into college with appropriate fanfare, few expected White to jump all the way to the No.7 in the 2019 NBA Draft.

White and Morant have a similar path to success. Like his fellow Top 10 guard, White is going to get the chance to be a factor in the Bulls offense early. New coach Jim Boylen will likely opt to start the season with the tandem of Kris Dunn and Zach LaVine in the back court, but White could quickly work his way into the rotation and even the starting lineup. As a more offensive force, the duo of White and LaVine may be the better option for a team looking to cement an offensive identity.

Now — White is still a longshot even if he works himself into the starting lineup. But his ceiling for 2019-20 is a Trae Young-esque rookie season. After a tumultuous first month in the league, Young landed back on his feet and averaged 19.1 points and 8.1 assists per game over his first year. One in which he's given the freedom on a fledgling team to take games over and launch from three whenever he feels appropriate. The only thing that would prevent White from chasing Young's numbers are LaVine's and forward Lauri Markannen's presence in the offense.

Again, this is a longshot, but if you're looking for an upset prediction for a rookie to burst onto the scene this year, look no further than White.

What He'll Need: 23 points per game and 6 assists per game

Get exclusive access at NBA All-Star 2020 in Chicago with an Official Ticket Package from NBA Premium. Packages include tickets to State Farm All-Star Saturday Night and the 69th All-Star Game, plus 2-hours pregame hospitality access and much more. NBA Premium is the ONLY way to get official ticket to NBA All-Star 2020.