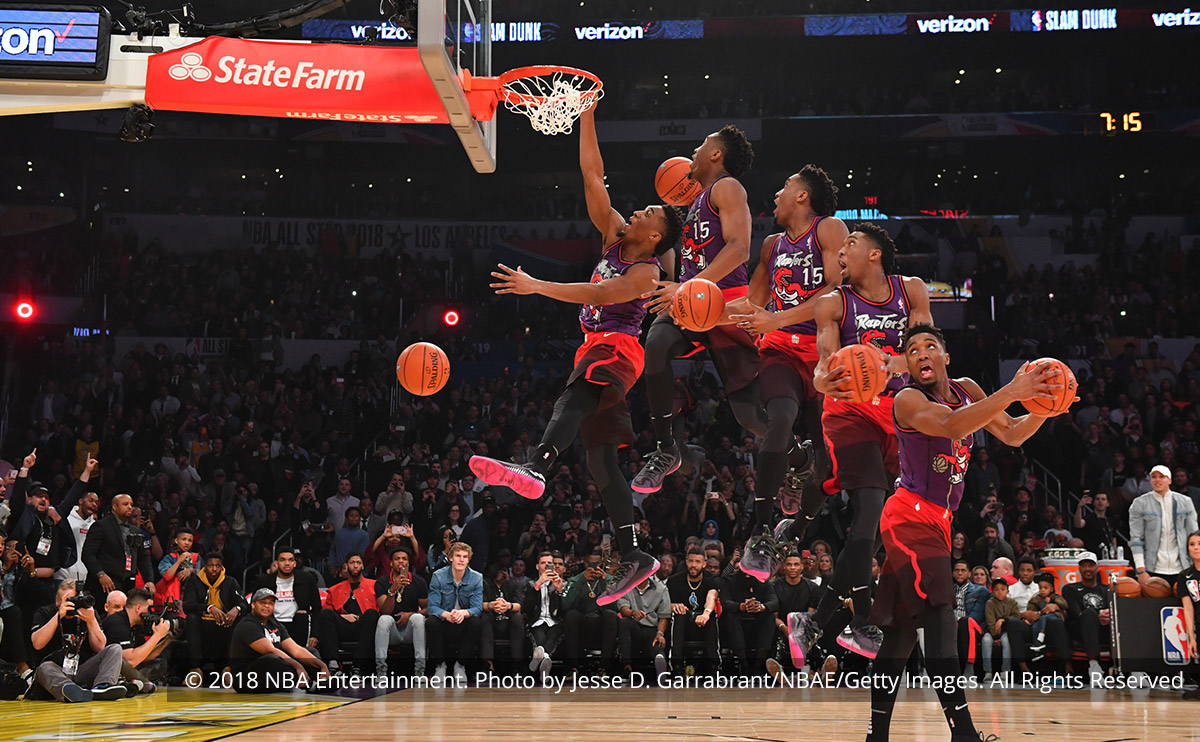 Nothing is certain in life other than three things — death, taxes and the Slam Dunk Contest providing some of the best moments in NBA history.

With NBA All-Star 2020 headed to Chicago next year, we're looking back at the top 10 Slam Dunk Contest moments of all-time.

In 1988, Michael Jordan wasn't the worldwide symbol that he is famous for today. At that point in time, he was in the midst of a stretch where he couldn't lead the Chicago Bulls past the 'Bad Boy' Detroit Pistons en route to the NBA Finals. But 1988 is one of the most important years of Jordan's career because it is when he immortalized his brand.

In front of a home crowd in Chicago, reigning dunk champion Jordan produced one of the most memorable images in basketball history. With his legs wide apart and tongue out, Jordan dunked the ball from the free throw line and implanted an image on the mind of every basketball fan in the world.

If this list was done individually by specific dunks, there's a good chance Vince Carter's performance in the 2000 Slam Dunk Contest would make up the top 4 slots. Each dunk in its own right has a place in history, but as a whole this performance belongs on the Mount Rushmore of rim rattlers. Carter single-handedly revived a contest that many had thought was on life support throughout the 1990's, showing off what was possible in the new millennium. Whether it's the between-the-legs slam, the honey dip or the reverse windmill, everyone has a favorite Carter dunk from the 2000 Slam Dunk Contest.

The dunk contest is all about showmanship, and few have ever done it better than Dwight Howard. The Superman dunk is memorable for a multitude of reasons, but the best aspect of it is the imagery. Donned in full Superman get-up, Howard suspends belief for a moment in time that he may actually be the Man of Steel. With the cape fluttering through the air mid-flight, Howard proceeds to throw the ball with almost-Kryptonian power into the hoop. Is it a real dunk? Who cares — it's one of the most incredible moments we've ever witnessed at All-Star Weekend.

I'm going to give a warning of editorial bias before gushing about this slam: this is my favorite dunk of all-time. It is the most aesthetically pleasing dunk I've ever seen, and the degree of difficulty breaks the meter. With Orlando Magic mascot Stuff the Magic Dragon holding the ball above his head, Gordon proceeds to jump over him, grab the ball, put it under his legs while maintaining a sitting motion and then dunk it home. Watch it once, watch it twice... watch it for the rest of the day.

This dunk didn't win Gordon the competition because it was confined to a 50 point scale, when it reality the score should have been in the 100's.

As a rookie in the league, Zach LaVine was still searching for that one thing to help him stand out in his inaugural professional season. He found the answer by grabbing the key and unlocking a toychest of dunk ideas in the 2015 Slam Dunk Contest. LaVine's stock exploded during NBA All-Star 2015 as he wowed the entire crowd with a myriad of dunks that respeced the past while also looked towards to the future.

Remember when dabbing was cool? Me neither. But, Dee Brown was able to get in front of the fad by a good two decades with this delicious, no-look slam that he produced in the 1991 Slam Dunk Contest. Right as Brown's feet left the ground, he tucked his face into his forearm to blind himself as he approached the rim. Still, though, he threw down the ball with his left hand and with authority.

This is one of those dunks that doesn't look TOO crazy until you see a replay of it. And once you watch that replay, you sit there and don't really believe what you just saw. But don't take my word for it, watch the reaction that Jason Richardson gets when he pulls off a reverse, between the legs left-handed slam off of the bounce. If that description sounds insane, just watch the actual execution:

A player standing at 5-foot-7 shouldn't be able to dunk, let alone even come close to winning a dunking competition. But Spud Webb doesn't care about what anyone thinks. The 1986 Slam Dunk Contest saw one of the all-time great duels between legendary swingman Dominique Wilkins and the underdog Webb. What transpired was as close to magic as we can get in the sport, with Webb putting on a show for the ages and becoming the smallest dunk contest winner of all-time.

Nate Robinson always knew that when it came to dunk contests, he'd be compared to Spud Webb. At 5-foot-9, it only made sense that he'd be grouped with the only other prolific sub-six footer in hammer history. So instead of trying to separate himself from the Webb comparisons, Robinson decides to lean into them at the 2006 Slam Dunk Contest. He called Webb out to the court to help assist him in one of our favorite team-ups in the competition's history.

Telling your buddy to try and dunk over a car is something you say in jest and never think about again — until Blake Griffin went and did it in 2011. Griffin brought a car out onto the court with his teammate Baron Davis peeping through the sunroof, only to receive an alley-oop from Davis as he soared over the hood and to the rim. If you're looking for a timestamp on history, this was the beginning of what would come to be known as the "Lob City" Los Angeles Clippers team over the next five seasons.

Get Tickets to the 2020 Slam Dunk Contest

Get Your All-Star Package